iSTRETCH and The Greenland Ice Sheet

A              n ambitious research program involving the Greenland ice sheet will utilize Minnesota Wire’s iSTRETCH cable. The project endeavors to understand how climate is affecting the flow of the Greenland ice sheet, the second largest ice mass on the planet and the primary cause of global sea-level rise. The Greenland ice sheet contains enough ice to raise sea levels by 7.4 meters. It is one of the most significant potential contributors to sea-level rise in the 21st century. The European Union’s Horizon 2020 Research and Innovation Programme is funding the research. (For more information about the project visit: www.erc-responder.eu.)

Scientists at the internationally-renowned Centre for Glaciology at Aberystwyth University in Wales and the Scott Polar Research Institute at the University of Cambridge in the UK are conducting the technologically advanced research. The fundamental goal is to understand how physical properties and hydrological systems evolve over seasons and years, and how that evolution impacts on the flow of the ice sheet.

Observations have shown that ice-flow acceleration, in many cases, corresponds with growing surface meltwater. Every summer, as the temperature rises in Greenland, surface water on the ice sheet absorbs solar heat, speeding melting, and forming lakes on the surface. Fractures form as the ice moves over uneven bedrock. These fractures move vast quantities of water and heat directly to the base of the ice sheet. The ice begins to “surf” on the water, picking up speed as it moves. Additionally, the water that has flowed to the base forms rivers that can cut tunnels many feet high into the ice. 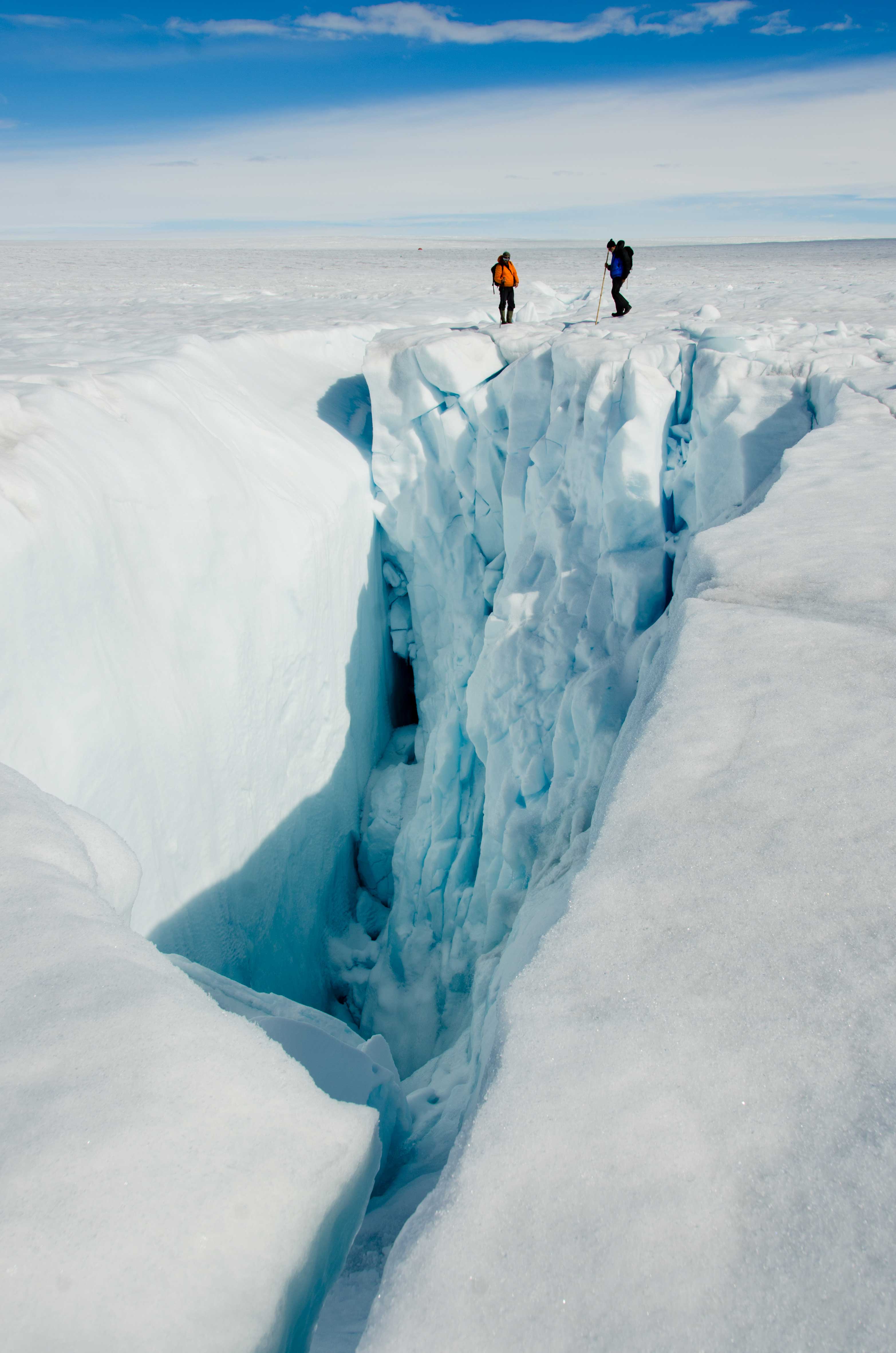 Research shows that the lakes form a massive network and become increasingly interconnected as the weather warms. When one lake drains, the water quickly spreads under the ice sheet, resulting in faster flow. The quickening flow opens new fractures on the surface. These fractures act as conduits for the drainage of other lakes and initiate a chain reaction that can drain many other lakes.

These cascading events include one case where 124 lakes drained in just five days. During this event, the flow of the ice sheet accelerated by as much as 400%, and this was only one of six observed events. Most lakes drain in this cascading manner. The growing number of melt lakes pose a threat to the long-term stability of the Greenland ice sheet. As much as 50% of recent ice loss from Greenland is not because of melting, but due to dynamic losses as these marine-terminating glaciers accelerate and increase their rates of iceberg calving into the ocean.

By using novel in-situ monitoring techniques, the team of scientists is beginning to piece together how the flow of the ice sheet is affected by water streaming into the networks below. In July 2018, the team will drill multiple boreholes on a fast-flowing sector of the ice sheet known as Store Glacier. The ice on Store Glacier is three-quarters of a mile thick. The researchers will deploy probes and sensors, utilizing iSTRETCH, into these boreholes, giving them the ability to measure the rate at which ice deforms, and how rapidly the ice slides over the ancient bedrock below. 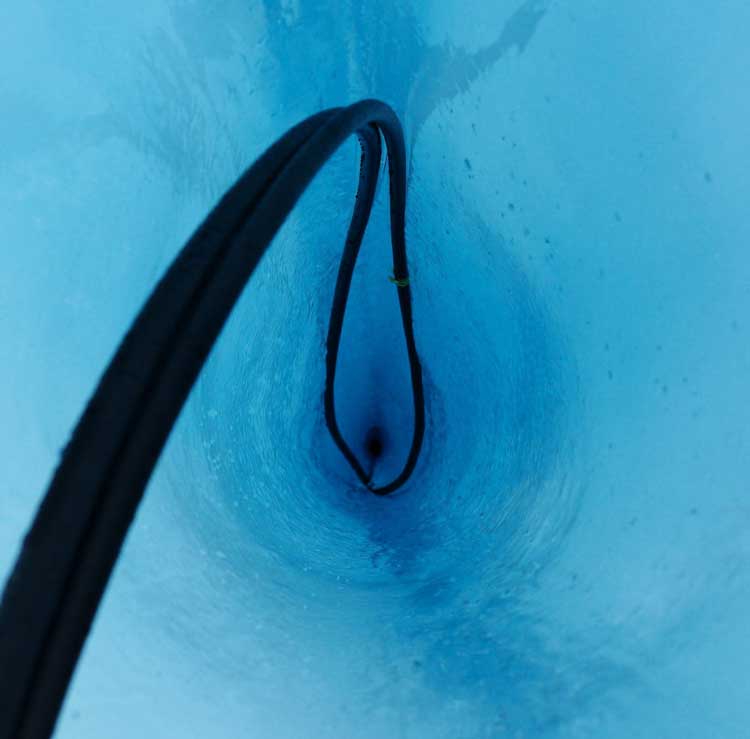 With ice moving so quickly, at a rate of 20 meters per day, the research requires novel approaches and innovations. Initially, standard electrical cables were used in the project. They were unable to withstand the stretching caused by the rapid flow of ice and snapped after only three months. To ensure that cables and sensors last longer, the researchers chose Minnesota Wire’s iSTRETCH—an electrical conductor that stretches 40% while maintaining electronic performance.

“It is very exciting to be using the iSTRETCH cable,” said Dr. Sam Doyle from Aberystwyth University. “It will allow us to make measurements on a fast-flowing glacier for months, if not years, which has not been possible previously.”

“We developed iSTRETCH for exactly this type of sensitive, yet rugged project,” said Paul Wagner, Chairman & CEO of Minnesota Wire. “We are honored to have the opportunity to play even a small role in this important work.”

Contact Minnesota Wire to learn more about our elastomeric iSTRETCH.

CONTACT US
REQUEST FOR QUOTE
TALK TO AN EXPERT 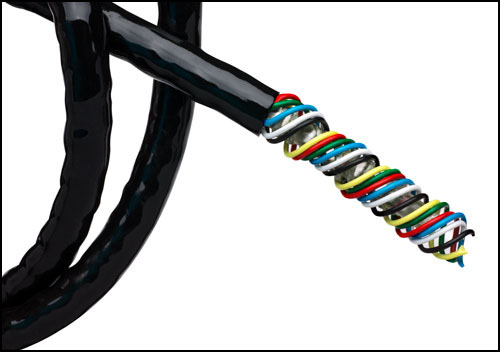 Minnesota Wire has begun manufacturing 8,568 specialty coil assemblies utilizing our patented iSTRETCH wire for a defense contractor. Each of the assemblies contains a sixteen-foot, six-lead cable. The sale represents the largest single sale of iSTRETCH in the company's history!

A Revolution in Possibilities

STRETCH PLUS FLEX PLUS MOTION

iSTRETCH and The Greenland Ice Sheet

MN Wire is proud to announce we have received the Minnesota Family Business Award from the Twin Cities Business Magazine!

MN Wire has been featured in the May 2020 edition of the National Defense Magazine.

LEE EISENBRAUN: A PASSION FOR LEARNING, COMMITMENT, AND A CAN-DO ATTITUDE.

R&D Funding Through the U.S. Government

If you have an innovative concept but are leery of costly R&D, the federal government may be able to help.

Don't miss this article written by our very own Steve Pape. Steve is Minnesota Wire's Design Engineering Manager. The article first appeared in the Medical Design Briefs, January, 2016 issue. The article is loaded with solid information.

SOLIDshot is a new wearable basketball shot improvement system that utilizes Minnesota Wire's iSTRETCH. SOLIDshot tracks and records a player's arm movement. A digital readout displays information that highlights changes the shooter needs to make—improving the form and consistency of a player's shots.

Select the link and check out the video—high scores for technology!

Each year Minnesota Wire honors local veterans. This year we created a special video, click the link below to watch it.